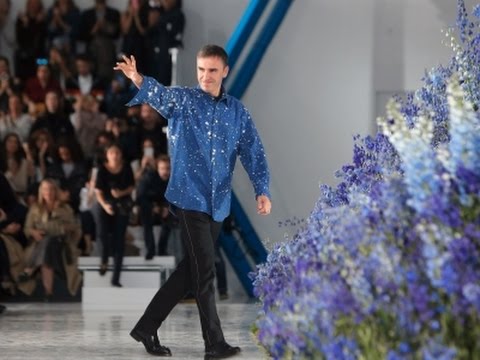 The miracle designer, Raf Simons, does it again and saves Calvin Klein.

As we have already mentioned on occasion, Raf Simons is not just the fashion designer. Raf Simons is much more than that. In reality, Raf Simons is beginning to become an istutition on its own. And, what Raf Simons has achieved in the world of fashion has no examples with which to compare. Raf Simons saves Calvin Klein.

If 15 years ago saved Jil Sander from bankruptcy and put it back on everyone’s lips, in 2012 he re-floated to, nothing more and nothing less than, Christian Dior. The brain of such feats seems to have no limit and now, with Calvin Klein, the miracle returns. Since the year and a half that leads to the American house has already received the award two CFDA awards and I receive the praise of critics and colleagues in each parade.

The passion of Simons for the work of Warhol is always reflected in his collections since he arrived at the house, where he says he feels more free than ever to do and undo. We are witnessing a resurgence of taste for the unprecedented Warhol work with exhibitions throughout the country. And there, once again, Raf Simons is ahead of his time and closes an agreement with the Andy Warhol foundation for the visual art to access the work of the Pittsburgh.

We do not know if his closeness to Warhol and his work, and his taste for it, have made a dent in the Belgian fashion designer who often comments on his intention to cross the border of fashion to land in other areas of art outside of it. The cinema seems to have the most ballots according to the closest circles. We look forward to it because, we are sure, it will succeed in every project that it undertakes without a doubt.